There are some things in life that we take for granted: such as the fact that the sun will rise from the East and set in the West. Another one of those facts, is that years have 365 days, 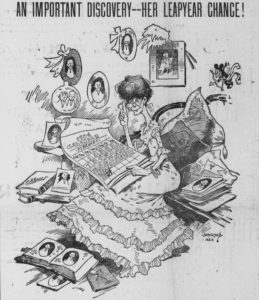 subdivided into twelve uneven months that have either 30 or 31 days. Except from February, which has 28. Unless it has 29, in which case the year has 366 days. These years, are called “Leap Years”.

But why does that happen?

To examine what is a leap year and how its existence can be justified, we must first make sure we define what a regular year is. In the Roman years, the western world used the Julian calendar to measure the trip Earth makes around the sun. This calendar, featured a standard 12-month, 365-day year, with a bissextile day inserted every fourth year at the end of February to make an average year of 365.25 days. However, although this calendar was more or less accurate, it was a tad off; the length of the solar year is actually 365.242216 days. Therefore, the Julian year was too long by .0078 days (11 minutes 14 seconds).

Now, in universal terms, this may seem like a minuscule amount of time. However, for us it made a huge difference. In the 16th century, the vernal equinox was falling around March 11 instead of March 21. If that kept on going, we could end up celebrating Christmas in June! This, led Pope Gregory the 13th to re-adjust the calendar by moving the date ahead by 11 days and by instituting the exception to the rule for leap years: if the year can be divided by four it is a leap year, but if it can be evenly divided by 100 or by 400 then it is not.

This complicated system is far more accurate but still not accurate enough: in just 3.500 years, it will be off by a day.