DST is a practice that may have been implemented in almost every corner of the world in the last 100 years, but is in fact quite an old idea, that was used as a practical way of organizing farming. In its modern form, it was first introduced by Benjamin Franklin in 1784 and was promptly rejected as pointless.

However, in the turbulent times of the first world war, when energy was scarce and its conservation could be a matter of life and death, the concept actually took root and everybody started doing it, to minimize the spending of resources. 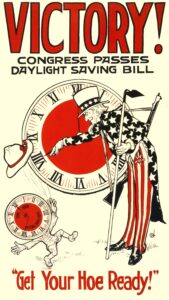 It is now almost 100 years after the end of the war, but somehow DST is still in effect in more than 70 countries. Some people even argue that it is useful after all: they say it saves energy, promotes a healthy lifestyle, and reduces traffic accidents. Truth is, DST does nothing of the above.

Energy: The idea behind the energy saving that the Germans introduced, is that while changing the clocks reduces the use of artificial lighting in the evening but increases use in the morning, the evening reduction outweighs the morning increase. A sound argument …that is about 100 years old.

Health: It’s true that DST does provide extra daylight in the evening, but this tiny benefit is no match to the huge downside of a messed up circadian cycle, which can lead to depression, or even heart attacks.

Accidents: There are absolutely no arguments to support that claim, other than some very unreliable statistics, that suggest a slight decrease in traffic accidents during DST.

So, if it no longer saves us energy, if it doesn’t have a real impact on traffic and if it is actually harmful for our health (and our sleep) what’s the point of keeping it?