At one point or another in your life, chances are that you might have experienced the frustration of having to advance your clock by one hour during March, subsequently losing an hour of sleep. It is something that we learned to cope with even as children. But let’s just take a moment here and ask: what is Daylight Saving Time (DST)?

Most people would think it’s a traditional agricultural practice, to aid farmers in more successful harvests. Actually, farmers don’t have anything to do with DST and they don’t benefit from it whatsoever. The truth, is indeed quite far from what you’d expect. 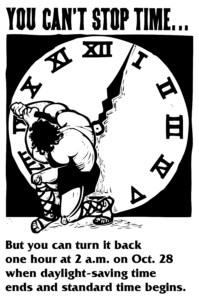 Although modern DST was first proposed by the New Zealand entomologist George Hudson in 1895, it was introduced by the Germans during the years of the First World War, as a way to conserve coal during wartime. The Entende powers, and many neutral countries soon followed suit. Russia and a few other countries waited until the next year and the United States adopted it in 1918.

Nowadays, DST is active in more than 70 countries worldwide and affects over 1 billion people annually. Today, the functionality of DST is a subject under debate, as technology energy consumption has increased in complexity in the last 40 years, rendering it obsolete.