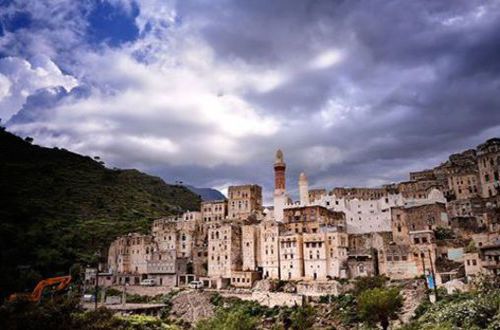 The Republic of Yemen is a state on the Arabian Peninsula in Southwest Asia and is state of the Middle East. It borders with Oman and Saudi Arabia. West, bordering the Red Sea and the south by the Gulf of Aden. Capital (De Jure) is the Sanaa (1,976,081 inhabitants, 2009 estimate) and other big cities is the de facto capital since 2015, Aden (671 162 t), the Taiz (539 454 n.) and Al Chonteinta (459.567 K.) The country consists of a low coastal area, the depth of which rise high mountain ranges, lowering to the east and ending in steppes and deserts. This internal high country (Mount Jebel Chantour, 3.760 m. Height) crossing several deep valleys full of oases. This area is under the influence of the summer monsoon and receives significant rainfall, the largest of the Arabian Peninsula.

Yemen is one of the oldest cradles of civilization in the Near East. Among the 12th century BC and the 6th century, the area was part of the kingdoms of Mina of Sheba and Chimiaridon, who controlled the powerful commerce of spices. Later, it was under the rule of Ethiopia and Persia.

The country comprises four geographical regions. In the western region “Tichama” consists of very hot and arid coastal plains and lagoons teem with mosquitoes of malaria vectors. The official currency is the Yemeni rial (YER)